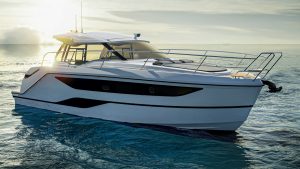 Bavaria is set to launch its smallest SR model yet, the Bavaria SR33, at the Boot Düsseldorf boat show in January…

The new sterndrive-propelled Bavaria SR33 will feature the same distinctive ‘open-with-hardtop’ formula developed to such good effect for the Bavaria SR41 and Bavaria SR36.

Designed to offer the sportiness of Bavaria’s S-Line with the superior comfort and luxury of the R-Line, it has proved a big hit both with dealers and customers.

Based on a MiCad deep-vee hull, with styling inside and out by Marco Casali, the new Bavaria SR33 is a Cat B/C design with what appears to be substantial freeboard for its length.

In fact, all the dimensions seem to be unusually generous with an LOA of 37ft 5in (including bathing platform) and a maximum beam of 11ft 4in. As with its larger SR siblings, it features a hard top with sunroof and a distinctive aft-facing transom dinette that converts to a sunpad.

Inside the cockpit itself there’s a second, larger dinette to port opposite a wet bar with a chaise longue and helm station forward.

The forward double is open plan to the saloon seating, which itself converts to an occasional fifth berth with the aid of a drop-down table and infill cushion. The heads and shower compartment remains to starboard.

Bavaria is still in discussion with Volvo and Mercruiser over engine options, but expect a choice of both single and twin petrol and diesel sterndrives with a total combined output of up to 700hp.

The challenge will be to find a suitably compact twin diesel alternative to the popular 220hp Volvo D3 diesels now that production has ceased. Pricing details are also on hold until the engine options have been finalised. November 26, 2022
Strike 1 to Hodgkinson and Sorensen at SSORC Strike 1 to Hodgkinson and Sorensen at SSORC

You may have missed

November 26, 2022
Cast your vote for the RYA Club of the Year Award